Coins and tokens may be either cast or struck. Usually, in Europe, casting was one of the methods used to make counterfeits and most silver and bronze coins and tokens were struck or pressed between two engraved or embossed dies. The design on the dies would thus be replicated in relief on the two faces of the coin or token. The term ‘obverse’ is used to describe the face naming the issuer and the term ‘reverse’ the other.

A fine summary of token production is contained in a paper by Thompson and it is now clear that the vast majority of tokens – if not all – were produced in London and at least a proportion of these at the Tower. Sometimes the dies used to produce the tokens were ordered to be sent out to the provinces but there is no good evidence for local production and it seems to have been the case that this did not often happen if at all. The making of these tokens required specialized coining presses, involving expensive machinery that could not be easily manufactured. The mechanics of token manufacture are summarised on a page of the Royal Mint Museum’s website.

The dies used to produce the tokens were prepared by hand, many small stamps, called puncheons, each in the form of a single letter, number, symbol, or device, being hammered into the surface of the die to form the design. Since different workshops used different puncheons, the symbols, letter forms and number forms on individual tokens can be studied to assign particular tokens to particular workshops. Study of the Nottinghamshire series of tokens has incorporated this level of analysis but this has not yet been applied to the Norfolk series.

Nonetheless, we can instantly tell that the same puncheon of a ship was used to prepare the dies for tokens of both Nicholas Golding of Shipdham and Clement Trotter of Yarmouth (see above top row) whilst the same puncheon of a dove with an olive branch in its beak was used to make dies for the farthings of both Richard Freeman of Norwich and William Woorts of Yarmouth (see above bottom row). Trotter’s token is dated 1653 and Freeman’s 1657; since most complicated puncheons like these did not have a long life, this helps in placing when the other two undated tokens were struck.

Furthermore, the fact that each die was prepared by hand means that even dies that were produced in the same workshop with the same puncheons and intended to replicate the same design will differ slightly. In this way we may separate groups of tokens produced with the same design for the same issuer but with different dies and spot when an old die was being reused with another, newer one.

It is clear that batches of tokens would be ordered from London and then either brought back by the client – or their agent – or shipped out to them. Sometimes, it appears that several traders in one locality organised themselves into a group to order several batches of tokens, presumably to save on carriage and, quite possibly, obtain a group discount on production costs. In Norfolk, a case in point is furnished by four out of the five token issues from Upwell; all are dated 1664 and were clearly made at the same workshop. 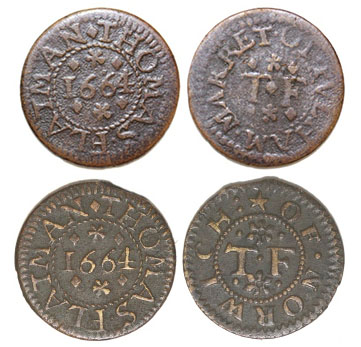 Sometimes a die might be reused when circumstances changed. For example Thomas Flatman of Pulham Market had tokens produced in 1664 with the date on the obverse. Later, when he moved to Norwich, he had a new reverse die produced at a different workshop advertising his new location (see above). On the basis of the puncheons used on the replacement die this second issue belongs to 1667 but the obverse, with its 1664 date, was obviously not felt worth changing. 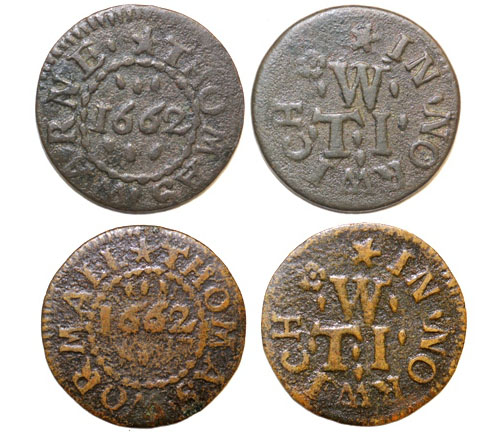 Very rarely the same reverse die could be used for different people. Both Thomas Warne and Thomas Wormall must have ordered tokens from the same workshop in 1662 and presumably both had a wife whose name began with the letter ‘I’ (see above). 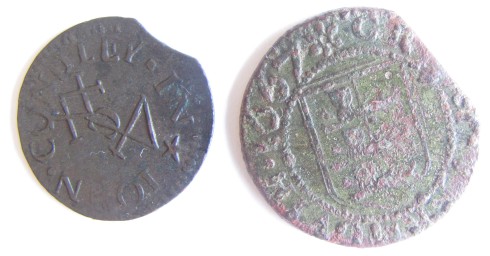 Sometimes mistakes occurred as indeed they still do at the mint today. Occasionally a token would become stuck to one of the die faces and would then be punched on to the next token fed into the milling machine. This produces something called a brockage where one side – the side punched by the stuck token – has an incuse impression of the other side. The blanks from which tokens were made were cut out from copper or bronze sheet in much the same way as tart bases are cut from a sheet of pastry. Where the cutter goes too close to the edge of a sheet or too close to where a previous token has been cut out the resulting blank will have either e flat edge or a bite-shaped piece missing (see above).